The clash between Mauritius and the Maldives over their maritime borders at the International Tribunal for the Law of the Sea has only just got started with both fighting over where the maritime borders of the Chagos Archipelago end and where those of Maldives begins. At stake is more than 95,000 square kilometres of prime ocean real estate and the ambitions of larger geopolitical players.

Mauritius and Maldives are currently embroiled in a fight at the International Tribunal of the Law of the Sea (ITLOS) with both claiming 95,828 square kilometres of the ocean between the Maldives and the Chagos Archipelago as falling within their respective exclusive economic zones (EEZ).

From the Mauritian perspective, its constitution recognizes the Chagos as its territory as does an advisory opinion from the UN’s International Court of Justice and a 2019 resolution from the UN General Assembly. “Therefore, Mauritius feels entitled that it can declare its own maritime zone concerning the Chagos”, explains Milan Meetarbhan, who served as Mauritius’ permanent representative at the UN between 2011 and 2015, “the two sides could not agree where to set the limits of this maritime zone so the matter is now at the ITLOS”.

For its part, Mauritius wants the ITLOS to decide the extent of its maritime zone in the Chagos, while the Maldives is arguing that since Mauritius and the UK have not yet resolved their own fight over who should control the Chagos, the ITLOS does not have the jurisdiction to decide the matter. Only after Mauritius and the UK have settled the Chagos matter amongst themselves can the Maldives then start talks on deciding the Chagos’ EEZ with whoever ends up with it.

“The Maldives does not want to be seen to be taking sides, so they are simply contesting the jurisdiction of ITLOS instead” Meetarbhan continues, “right now the process is just beginning, dealing with Maldives objection to the ITLOS deciding the matter, it still has to start hearings into the case each side is presenting.”

The current fight between Mauritius and the Maldives is a combination of a ticking time bomb left behind by the UK as well as a failure of diplomacy between the two Indian Ocean neighbours. First the time bomb: normally, coastal states are entitled to declare a 200 mile EEZ around their land area, where they are free to exploit and use resources falling within that area. Even before the fight with Mauritius, the Maldives did not accept the extent of the EEZ claimed by the UK.

The argument of the Maldives has been that, according to the United Nations Convention on the Law of the Sea (UNCLOS), a 200-mile EEZ can only be declared around populated islands, not uninhabited outer islands. What that meant is that the 200-mile EEZ could only be declared starting from Diego Garcia (the only inhabited island in the Chagos), rather than from uninhabited outer islands such as Peros Banhos and Salomon. Consequently, the EEZ around the Chagos should be 10 per cent smaller, and that around the Maldives bigger. The UK and the Maldives came with a draft agreement to settle their borders in 1992, but it was never signed, but rather left as a ticking time bomb that was left to Mauritius to pick up.

The story is also one of failed diplomacy between Mauritius and the Maldives to settle the dispute. Things jumpstarted after the UK unsuccessfully attempted to declare the Chagos a Marine Protected Area (MPA) in 2010, opposed both by Mauritius and Maldives, both with claims over the seas included in the MPA, with both submitting competing claims at the UN and both clashing over 95,828 square kilometres of ocean claimed by both Port Louis and Malé.

In October 2010, both sides started talks that went nowhere. In March 2011, Mauritius invited then-Maldives President Mohamed Nasheed as its chief guest on its national day celebrations to smooth over the dispute. That didn’t work either and a mere 12 days after the visit lodged a diplomatic note at the UN slamming Maldives’ claims. The matter stayed unresolved for eight years. 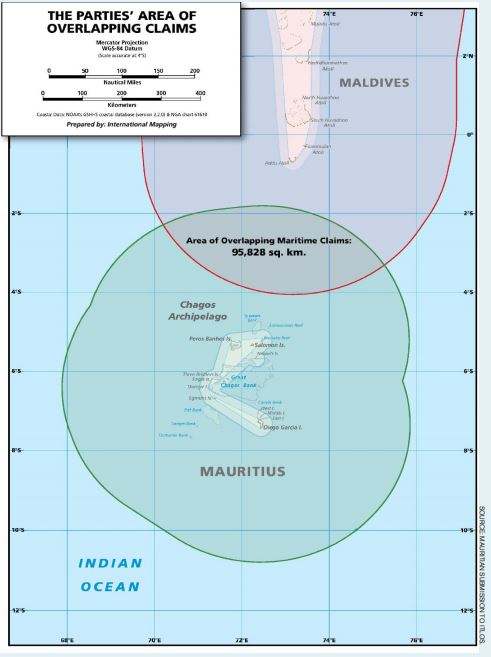 “This is just geopolitics being mishandled and in my view, both sides have handled this issue wrongly”, Vijay Makhan, former deputy secretary of the African Union tells l’express, “this issue should have been handled bilaterally, they should have just agreed to jointly submit their claim to the UN and jointly manage the area along the lines of the agreement we have with Seychelles”, referring to a 2011 UN decision allowing Mauritius and Seychelles to jointly manage and benefit from resources in 396,000 square kilometres of sea. “Island states such as ours need to go through a series of accommodations with one another and so far it has worked except in this case where the Maldives has dragged its feet and our diplomacy did not work as it should have”, he illustrates.

Fast forward to 2019 and the Maldives was one of the six countries, along with the US, UK, Australia, Hungary and Israel to vote against Mauritius at the UN General Assembly over the Chagos. “We did not find a way of settling this problem with the Maldives and now the Maldives has fallen into the trap”, Makhan argues.

The trap in question is the UK now benefitting from the discord between the two Indian Ocean neighbours over an issue that the UK left festering and which neither Mauritius nor the Maldives chose to resolve. The fight at the ITLOS is taking place at the same time as a Mauritian offensive at the Indian Ocean Tuna Commission (IOTC).

Following the advisory opinion at the International Court of Justice and a UN general assembly resolution demanding that the UK quit the Chagos, in June 2019 at an IOTC meeting in Hyderabad, Mauritius demanded that the UK be kicked out of the organization. Its statement presented there said that since the UK did not have rights over the Chagos, it is not “a coastal State situated wholly or partly within the area, it is not entitled to be a member of the IOTC”. 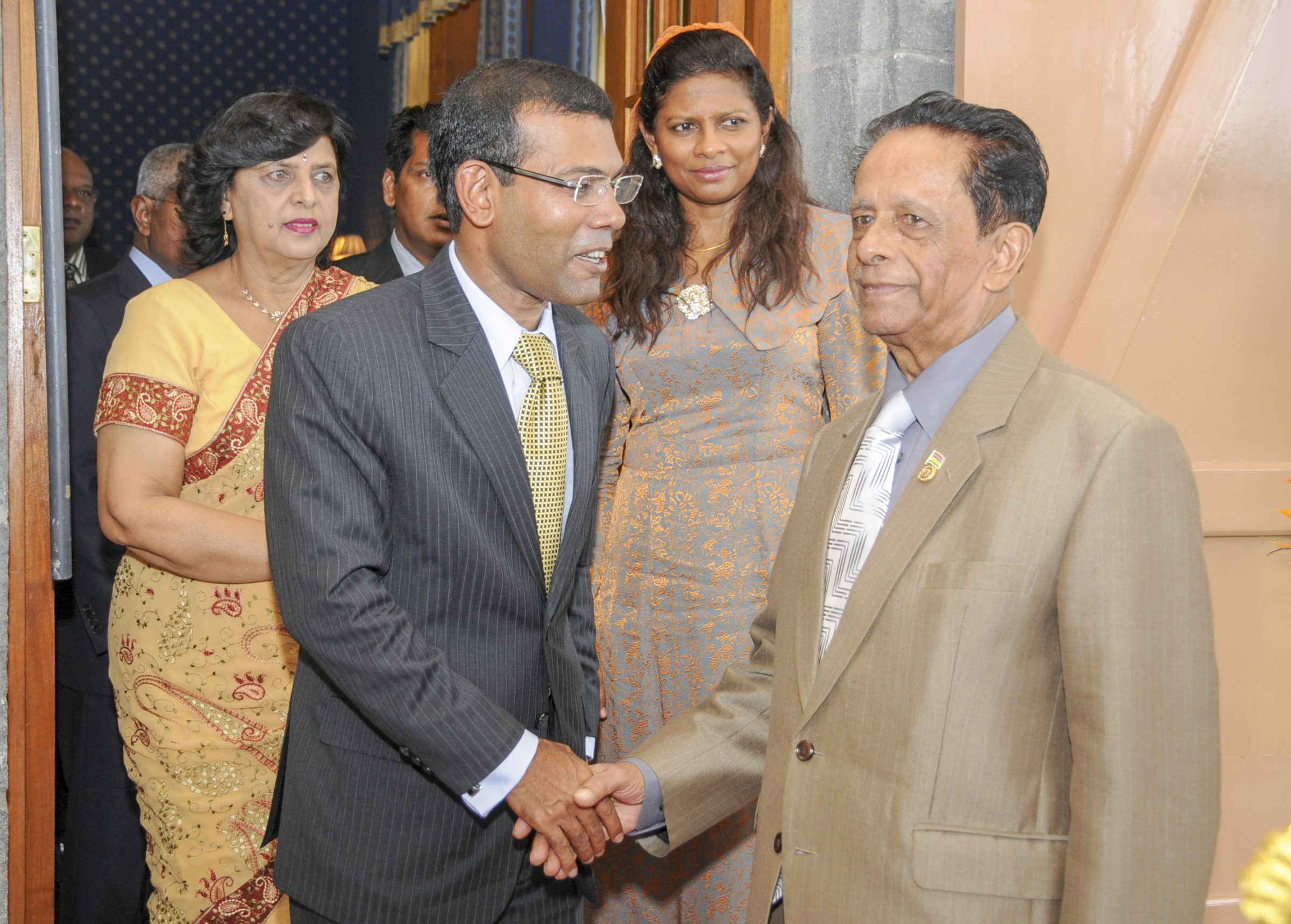 The perception in Mauritius now is that the Maldives is being used as a cat’s paw by the UK, “Of course the UK has a hand in what the Maldives is doing, it’s trying to use what happens at the tribunal to settle the score and complicate matters for Mauritius”, Makhan points out.

The UK is a major market for tourism and canned fish exports for the Maldives and enjoys a lot of influence there and the current president Ibrahim Solih has emphasized the sovereignty claims of Maldives. “The UK can try to use this argument between Maldives and Mauritius to say that they should stay on the commission since no one agrees on who actually controls what part of the sea around Chagos”, Makhan illustrates.

There is a much bigger geopolitical picture at play here than just the bilateral politics between two Indian Ocean states. “The main issue is that whoever controls this part of the ocean will also control the living and non-living resources of the area, fishing, mineral rights, all of that would be encompassed in this question”, says Meetarbhan.

Take fishing for example the Indian Ocean is prime real estate when it comes to fishing, accounting for no less than 25 per cent of global tuna output. And the waters around the Chagos are particularly rich pickings having the highest concentration of reef fish and tuna in the area. The British administration in the Chagos, for example, collected $8 million through granting license fees to trawlers fishing in these waters between 2003 and 2006. The British government, however, has discouraged the development of fishing industry in these waters – particularly after unilaterally declaring the Chagos an MPA – in its bid to win support from environmental groups for its continued hold over the Chagos. 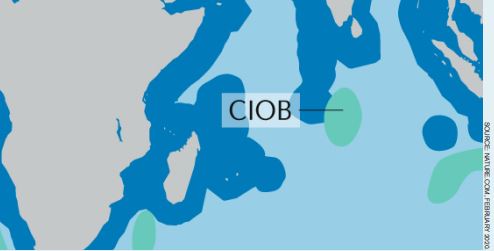 CIOB: The Central Indian Ocean Basin, overlapping with the waters of the Chagos is one of the few known marine sources of deep-sea minerals making this one of the most desirable locations in the world.

Nevertheless, the rich fish resources of the area mean that it continues to grapple with a big illegal fishing problem. According to MRAG Ltd – a consulting firm tasked by London to oversee conservation issues in the Chagos – between 1996 and 2014, British authorities caught no less than 93 ships fishing illegally, mostly from Sri Lanka, in the waters around the Chagos, each carrying an average catch of 2.5 tonnes.

The real bonanza, however, is what lies on the seabed around the waters being disputed between Mauritius and Maldives. And this is the question that is of interest to much bigger players in the region. Resource-poor island nations looking for riches in the sea is nothing new.

As early as 1975, Mauritius tasked the US oil company Texaco to look for oil in its waters. They didn’t. After Mauritius and Seychelles concluded their agreement to share 390,000 square kilometres of ocean, one of the first things they did was in 2018 to tap a UK company Spectrum Geo to look for oil in a 20,000 square kilometre bloc in that area. In February 2020, Spectrum Geo pulled out without finding anything.

Deep-sea mining for polymetallic minerals – clumps made up of manganese, cobalt, copper, iron and nickel – however, is another matter. Manganese is extensively used in the steel industry, while cobalt is a key component in the manufacturing of lithium-ion batteries used to power everything from electric cars, mobile phones, laptops, solar energy storage units to small boats. So far most of the world’s cobalt is mined in the Democratic Republic of the Congo and 80 per cent of refined cobalt is processed and sold by China. That has led major economies to look to deep-sea mining for minerals as an alternative in what is estimated could grow to become an $11.9 trillion industry.

The interesting thing is that the 95,828 square kilometres that Mauritius and Maldives are fighting over just so happen to sit astride one of the largest known deposits of polymetallic minerals in the world, just 500 kilometres off the coast of Diego Garcia. (see map).

One of only five such deposits discovered so far in the world. Within this deposit off the coast of the Chagos, each square kilometre of the seafloor is estimated to contain around five kilos of polymetallic minerals. According to the UN’s International Seabed Authority (ISA) – the international body looking to regulate the nascent deep-sea mining industry – thus far only 0.3 per cent of the ocean floor has been explored. And in the Indian Ocean basin, where the Chagos deposits are, the ISA in 2016 granted India the exclusive right to explore the area looking for these minerals until 2022. “We know that the Indians have found some things there, but the area is not fully explored so we just don’t know the extent of these deposits where they begin and where they end”, says Makhan. Which is why Mauritius and the Maldives are fighting tooth and nail over every inch of the 95,828 kilometres in question.

This is potentially very lucrative real estate. And whoever ends up controlling as much of the ocean here is in a better position to decide who gets to mine it. A question that much bigger powers in the region are not insensitive to. Given the stakes, what’s happening at the ITLOS is being watched by many more than just Mauritians and Maldivians.

Both Mauritius and Maldives are now being unwittingly sucked into a much bigger geopolitical game. And for that, they only have their inability to strike a deal with one another to blame.