Recent calls to boycott yellowfin tuna caught from the Indian Ocean from major retailers is of great concern to the Maldives.

The Maldives has traditionally been a  fishing nation that has heavily relied on the fisheries sector for employment,  foreign exchange,  and food security. Tuna fisheries,  in particular, is engrained in the culture, history and the very fabric of Maldivian society. The pole and line and handline tuna fisheries of the  Maldives are iconic fisheries that have maintained their traditions and are as environmentally friendly as they were at inception.

Thus, the status of the Indian Ocean yellowfin tuna stock and the recent calls to boycott yellowfin tuna caught from the Indian Ocean from major retailers is of great concern to the Maldives. As a responsible fishing nation, the Maldives has always advocated for and stood by the principles of sustainable fishing. This is clearly evident from the continuous work done by the Maldives to promote and maintain clean, green,  sustainable tuna fisheries at local and regional levels.  The pole and line tuna fishery of the Maldives was the first-ever Indian Ocean tuna fishery to be certified by the Marine Stewardship Council (MSC) and our tuna fisheries have been acknowledged by a number of civil society organizations as exemplary fisheries. Our efforts to ensure the use of sound, modern-day fisheries management tools at the regional level has also been widely acknowledged within the industry. The proposals adopted by the  Indian  Ocean  Tuna  Commission  (IOTC), led by the Maldives,  on the implementation of the precautionary approach  (adopted as  Resolution  12/01),  on target and limit reference points and a decision framework (adopted as Resolution 15/10) and on harvest control rules for skipjack tuna in the IOTC area of competence (adopted as Resolution 16/02) are key instruments established at the regional level through concerted efforts of the Maldives, despite the serious pushback from various stakeholders, and are a clear indication of our commitment for sustainable tuna fisheries.

Following the assessment of the Indian Ocean yellowfin tuna stock by the Scientific Committee of the IOTC in 2015 as overfished and subject to overfishing, the Maldives played a key role in formulating the initial version of the Resolution On an Interim Plan for Rebuilding the Indian Ocean Yellowfin Tuna Stock in the IOTC Area of Competence which was adopted in 2016. Thus far, the Maldives is one of the few countries to have successfully implemented the Resolution. The Maldives has also gone beyond the requirements of the Resolution to limit overall catch from the fleet (including the segment of the fleet exempted from the reductions)  despite the importance of tuna fishery to the economy of the country. 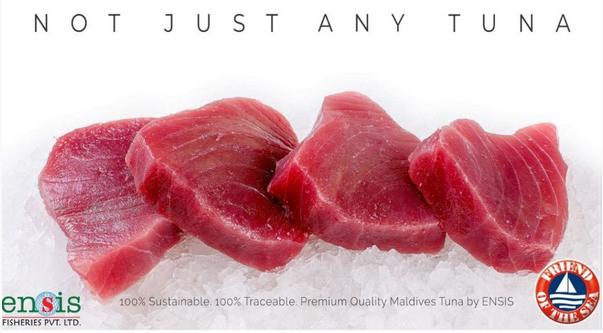 Ensis Fisheries, the largest tuna processor and exporter in the Maldives, has earned certification for sustainable seafood production by Friend of the Sea.(Sept.2019)

The process of establishing a change in a complex forum such as the IOTC that operates at a multilateral level is most challenging. It is a time consuming and costly exercise that requires a collective effort from all those concerned including the Maldives. The recent calls for a complete boycott on the sourcing of yellowfin tuna from the Indian Ocean, across the board in a non-differentiated manner with no regard to the efforts made by the countries that have abided by the rules, is unfair and unwarranted. Such a boycott will have a major impact on the economy of the Maldives and the standard of living of more than 15% of the workforce that make a living from our already sustainable and responsible fisheries sector. It is also of great concern to the Maldives that none of the civil society organizations that have been at the forefront regarding the calls for the boycott has reached out to the Maldives or the G16-group of like-minded Indian Ocean coastal states, in spite of our previous work to address the issue of yellowfin tuna stock.

At the same time, it is important for member countries of the IOTC to address the issue squarely and comprehensively. Considering the  serious  consequences  that  the  Maldives  and  various  other  Indian Ocean coastal states would face if the current status quo is maintained, the Maldives and the industry-led Maldives  Seafood  Processors  and  Exporters  Association  (MSPEA) have agreed  to  take  the following additional steps to rebuild the stock;

To secure healthy and productive tuna stock, it is crucial that the members of the IOTC seek holistic solutions to the issue at hand. The Maldives believes that the current practice of establishing ad-hoc stock rebuilding measures is a risky path that should be avoided at all costs. The one-stop solution to address this issue is the establishment and enforcement of a management procedure and an equitable allocation scheme for the important tuna species that are fished in the Indian Ocean.