What I remember most about my first trip to the Maldives is the colours: the turquoise sea against the white sand, the bright green of the palm trees. They’re so vivid that it’s almost as if you’re imagining them. I’d gone from a crazy filming schedule and grey London skies to all this colour and complete calm.

In January I went back, and this time I took my parents. I really like going away at that time of year: having that moment to reset and to say goodbye to the previous year. Personally and professionally, I was feeling quite burnt out because I’d done a play and then gone straight into filming [upcoming BBC and Netflix drama] The Serpent in Bangkok for five months, playing a French-Canadian serial killer. In my line of work, you spend lengthy periods away from the people you love, so it was really special to have that time with my parents. The last time I went on holiday with them, I was 15. I get my love of the sand and the sea from them. When I was a kid, we’d do a trip down to Cornwall in summer or hire a villa in Portugal – my dad was happy anywhere that had a big fish market. 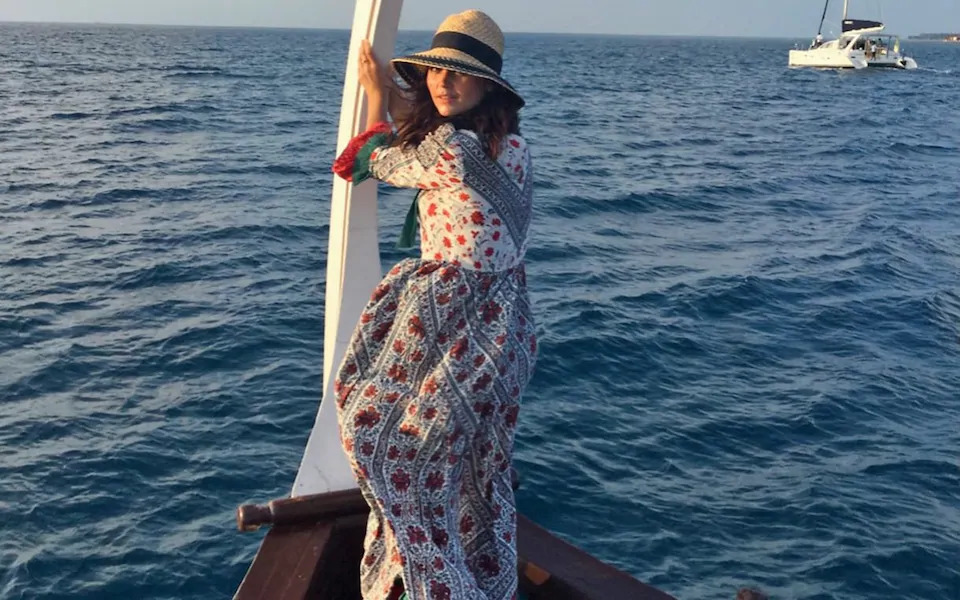 The flight from London to Malé, the capital of the Maldives, takes about 10 hours. I normally love long-haul flights; there’s something about being among the clouds that I find really peaceful and I treasure that time. From Malé, you usually have to take a seaplane to your resort, but we went by speedboat because ours was so close. We stayed at One & Only Reethi Rah, which is on its own island and has amazing amenities but isn’t ostentatious at all. Everything is very laid-back, so you’re forced to slow down.</span>

The joy of being on an island is that feeling of being completely cut off. At Reethi Rah, you’re surrounded by massive, beautiful old trees and tropical flowers, and the villas are very secluded so you have total privacy. You feel like you’ve been shipwrecked on a desert island in the middle of the sea. It’s the best of both worlds: you can hideaway with a book, but there’s also lots to do and spectacular restaurants.

The sunrises and sunsets are very compelling in the Maldives. In the mornings, I’d watch the sunrise with a coffee, walk or cycle to breakfast, and then do some reading, yoga or have a spa treatment. The Thai massages are sublime, and you can do aerial yoga in a little hut perched on stilts in the sea, so you feel like you’re standing on water. You hang upside down and swing from a sort of hammock, all the while drinking in this incredible panoramic view of the ocean. 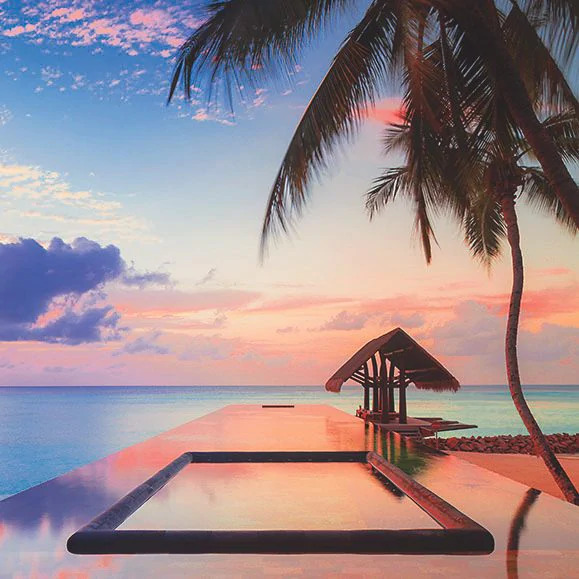 A lap pool at the resort

In the afternoons, there’d usually be frozen margaritas and a bike ride before sundown and dinner. My favourite restaurant was a Japanese tapas place called Tapasake where your dinner is cooked in front of you while reef sharks swim in the water below. You can see them cuddling and kissing each other. The beauty of staying in a place like that is you can also just order room service and enjoy the view from your villa.

My holidays aren’t always so luxurious. I love getting on the train and going to the South of France or up to Scotland and exploring new places. My post lockdown holiday was to Ischia, a beautiful, mountainous island off the coast of Naples that still feels very rustic. After seeing the heartbreaking pandemic news footage from Italy earlier in the year, there was something so lovely about arriving there and enjoying a dose of Italian warmth and culture. The Maldives is a place I’ll return to when I need to be still and replenish. It’s such a paradise that you could never get bored of it, but you want to go when you feel like you really need it.

4 places to stay in the Maldives 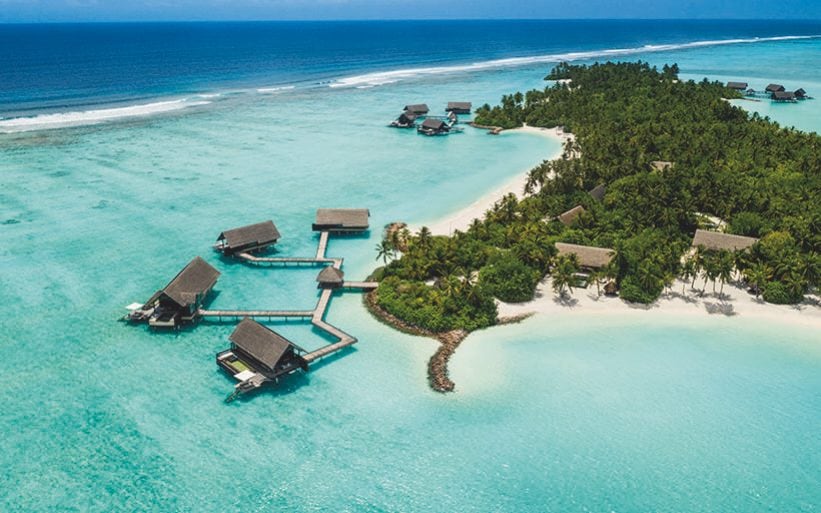 If guests at this lush resort tire of the 12 talcum-powder beaches, they can sign up for diving, tennis, rock climbing, art classes, cookery lessons or a first-rate spa treatment. The restaurants are fabulous. 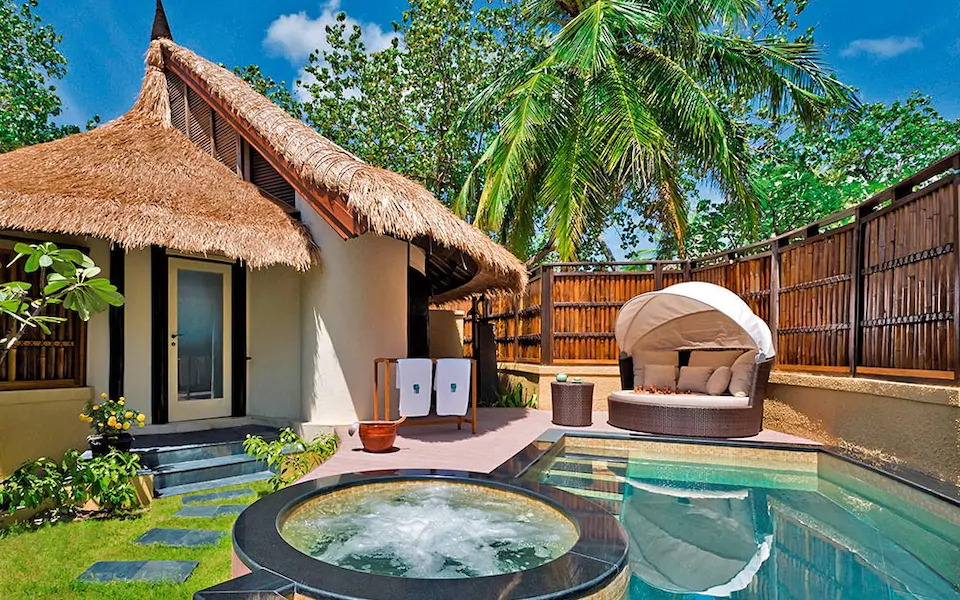 Stay in coneshaped thatched villas with private plunge pools and Jacuzzis, and dine in a bamboo pavilion on the beach at this eco-friendly retreat. The island is encircled by a coral reef. 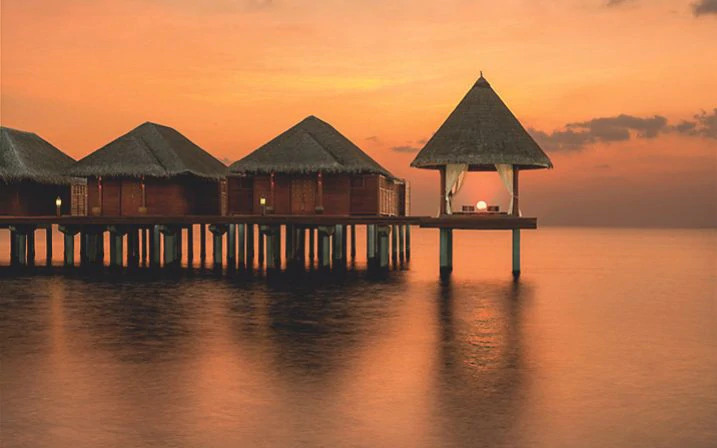 This Maldivianowned islet boasts a fine Maldivian restaurant, which is designed to look like a traditional sailboat. After a day relaxing by your villa’s private pool, dine on fiery lobster curry or fresh seafood poached in coconut milk. 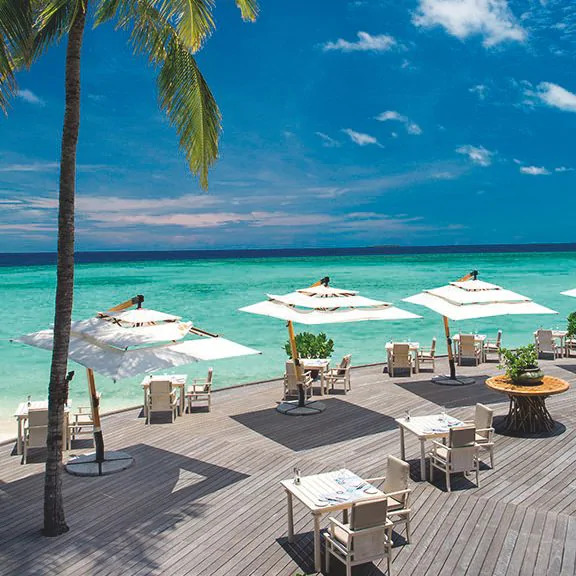 The villas either have sunrise or sunset views at this family-friendly resort. There’s a 24-hour doctor, a kids club and a babysitting service, while grown-up guests can enjoy surfing, beach games, tennis and diving, or chill out in the spa.