COLOMBO — U.S. Secretary of State Mike Pompeo has laid the groundwork for an ideological contest in Sri Lanka and the Maldives that Washington is spoiling to wage against the Chinese Communist Party — between democracy and tyranny.

Pompeo pulled no punches in driving this wedge during his visit this week to the strategically located Indian Ocean nations, his last swing through South Asia ahead of U.S. elections next week.

“We see from bad deals, violations of sovereignty and lawlessness on land and sea that the Chinese Communist Party is a predator,” Pompeo said at the end of his two-day visit in Sri Lanka. “The United States seeks to strengthen our partnership with democratic, peaceful, prosperous and fully sovereign Sri Lanka.”

In the Maldives, South Asia’s smallest nation and one that straddles the gateway to a crucial commercial shipping lane, Pompeo announced the U.S. plans to open an embassy in Male, raising the stakes for a geopolitical tussle with China, which already has a diplomatic mission in the Maldivian capital.

The tone Pompeo struck has put the elected governments of Sri Lanka and the Maldives on notice regarding global diplomatic currents.

U.S. President Donald Trump’s administration has been ratcheting up its security strategy by closing ranks with India, Japan and Australia — influential democracies along the Indian and Pacific oceans — to counter China’s expanding economic presence. The U.S. Free and Open Indo-Pacific strategy cover a swath of the globe from the U.S. West Coast to the western seas off India.

The ideological choice that Washington is asking Sri Lanka and the Maldives to make comes with both countries beholden to China and its financial muscle. Multibillion-dollar loans arranged by Beijing have funded a new port, highways and other pieces of infrastructure in the nations, part of President Xi Jinping’s Belt and Road Initiative.

China’s infrastructure diplomacy has given it a secure hold in both countries, upending a monopoly that India, now a regional strategic ally of the U.S., had enjoyed for decades.

Seasoned foreign affairs analysts contend Washington is eying the “moral high ground” that China, under the iron grip of its ruling party, has little answer for. “This is not a rhetorical squeeze, but where they [the U.S.] are drawing the line by advancing a cluster of values,” Dayan Jayatilleka, Sri Lanka’s former ambassador to Russia, told Nikkei Asia.

He added that Pompeo is implementing a long-term strategy while neglecting the blip that the U.S. elections represent to the U.S.-China battle for hegemony. Pompeo, Jayatilleka said, is trying to establish “a camp with a shared commitment to democracy and the rule of law [and one with] a common political DNA.”

Washington’s strident entry into the stretch of the Indian Ocean is expected to alter what had been a two-way contest for influence in the Maldives, between India and China. It comes on the tail of a groundbreaking defence agreement that Washington and Male signed, with New Delhi’s blessing. 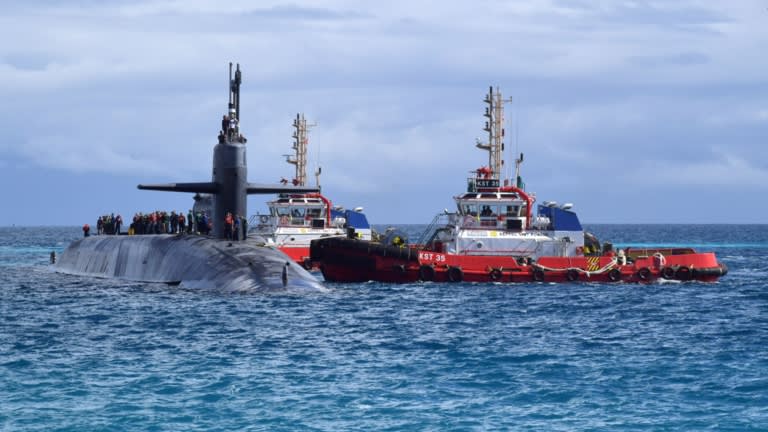 Tugboats guide the Ohio-class, guided-missile submarine USS Georgia (SSGN 729) into port at Diego Garcia on Sept. 25. The U.S. naval base is located south of the Maldives. (Photo courtesy of U.S. Navy)

The deal is in line with the goals of the so-called Quad — the U.S., India, Japan and Australia — an alliance that looks to build a security presence spanning the Pacific and Indian oceans.

“There has been a South Asian geopolitical rivalry between India and China, in which small states like the Maldives have been entangled,” said Azim Zahir, a Maldivian political scientist at the Perth-based University of Western Australia. “[But now] there is the larger U.S.-China rivalry, which has intensified.”

Washington’s timing in regard to the Male embassy, Zahir said, is politically conducive for the archipelago’s government. “With a pro-India government in Male,” he said, “the Maldives is now more firmly under India’s strategic orbit and, increasingly, the Quad.”

In Sri Lanka, President Gotabaya Rajapaksa pushed back against Pompeo’s China-bashing. He told the visiting U.S. official, the highest member of the Trump administration to visit Sri Lanka, that Colombo owes much to Beijing for its development assistance since 2009 when the country’s nearly 30-year ethnic conflict between the majority Sinhalese and the minority Tamils ended.

Sri Lanka is not caught in a Chinese debt-trap, the hawkish Rajapaksa said, countering Washington’s view that Chinese loans to Sri Lanka have been predatory.

Rajapaksa’s defence of Beijing was not lost on Sri Lankan foreign affairs commentators. “It reflected the tricky position Sri Lanka is in since we cannot lose either of our friends,” said Ameen Izzadeen, a columnist at the Daily Mirror, an English-language daily. “The president is keen to get development aid from China and he also knows Sri Lanka cannot spurn the U.S. altogether — it is our biggest export market.”

The increasingly vocal Chinese embassy in Colombo was quick on the draw to protect Rajapaksa, who heads an ultranationalist, pro-China government. It fired off a tweet mocking Pompeo.