The Maldives tourism minister says some visitors extend their stay due to unhappiness over how their own countries are handling the pandemic. © Getty Images

COLOMBO — The Maldives’ gamble to open borders in mid-July has begun to reap small but promising returns as international airlines arrive with Western tourists seeking a reprieve from the life-sapping grip of the pandemic to laze at the country’s luxury resorts.

By mid-October, some 26,500 high-spending holidaymakers had touched down in the Indian Ocean nation, up from 1,767 during the second half of July. Travellers from Russia, the U.S., Britain, Spain, Germany and France are among the top 10 countries comprising this tourism revival, according to the ministry of tourism. Others have come from the United Arab Emirates, Brazil and India, the only Asian nation on the list.

It is a trickle compared with the record-breaking year that the Maldives enjoyed in 2019 when the archipelago — famed for its isolated island resorts surrounded by clear blue waters — attracted 1.7 million tourists. Arrivals for 2020 have inched up to around 409,000, bolstered by robust traffic in January and February, despite March arrivals having plunged after the international airport was shut down to stop the spread of COVID-19.

Minister of Tourism Abdulla Mausoom now sees more hopeful signs from the shifting behaviour of the post-COVID tourists who have arrived over the past three months.

“A good thing that is happening is the duration of stay has increased, tripling during the last two months,” Mausoom said in an interview with Nikkei Asia. “The average has been 20 days-plus, while in 2019 it was seven to eight days.”

A number of visitors have tacked on additional vacation time after arriving. “Some tourists, after coming, have extended their stay because they are not happy with the COVID-management in their home country,” said Mausoom, a travel industry veteran. “They’re choosing to stay long, and we are now working on having longer-stay packages of three to four weeks because they have become very popular.”

The country’s vast array of resorts — from small, ultra-luxe hideaways where the wealthy spend $1 million a week to down-market guesthouses for college students — are rushing to open before November, the normal winter holiday season. Already, 104 resorts and 116 of the so-called safari boats, which offer live-on-board rooms, are accepting guests, pushing bed capacity to 27,574. 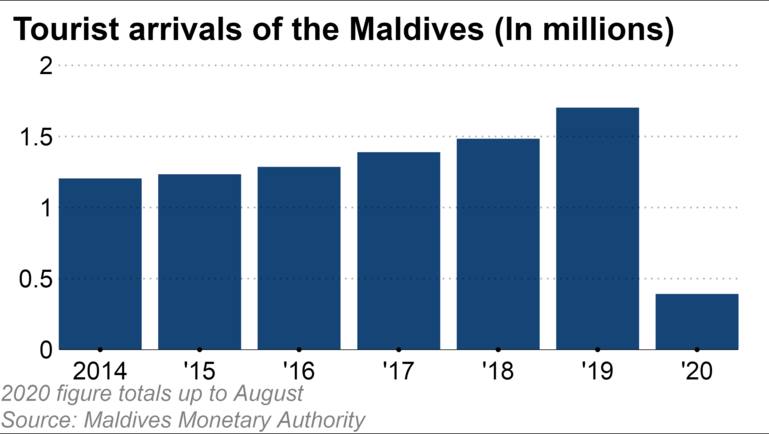 Maldivian health policies have changed since the mid-July opening to mitigate the threat of COVID while ensuring visitor safety. Tourists now need to test negative for COVID a maximum of 96 hours before arrival — a dramatic shift from the lax approach rolled out in mid-July when COVID tests were not required and two-week quarantines unheard of.

Mausoom conceded that the change was part of the country’s learning curve, as about 50 tourists who arrived since July have tested positive. “But only one of them was taken to a medical facility and he continued his holiday in a quarantine facility which was itself a resort,” he explained. “Each resort has a separate area if a tourist test positive, so they can continue their holiday. And those rooms are away from the other tourist rooms.” 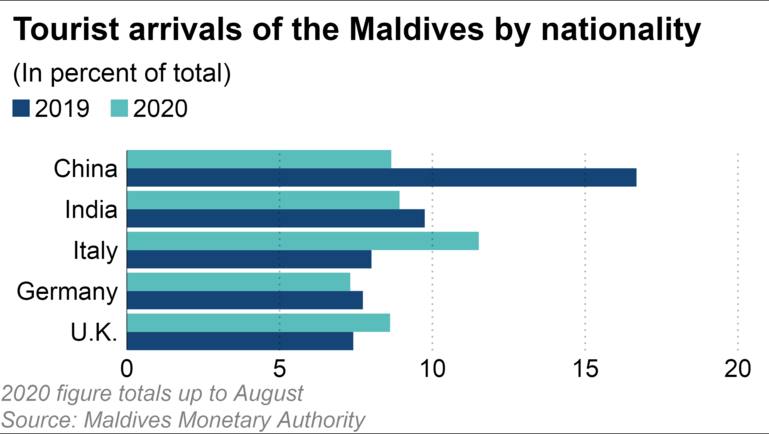 The Maldives’ effort to buck international trends stems from its tourism-dependent economy. In 2018, tourism accounted for 60% of foreign income for the $5 billion economy. But in the wake of the pandemic, as tourism tanked, international financial institutions like the Asian Development Bank and World Bank delivered grim forecasts. The ADB estimated a 5.5% contraction, or about $293.9 million.

The economic pain in South Asia’s smallest country, which has a population of 400,000, is clearly felt in the tourism sector. The Tourism Employees Association of the Maldives estimates that half of the nearly 45,000 people employed by resorts have lost jobs. 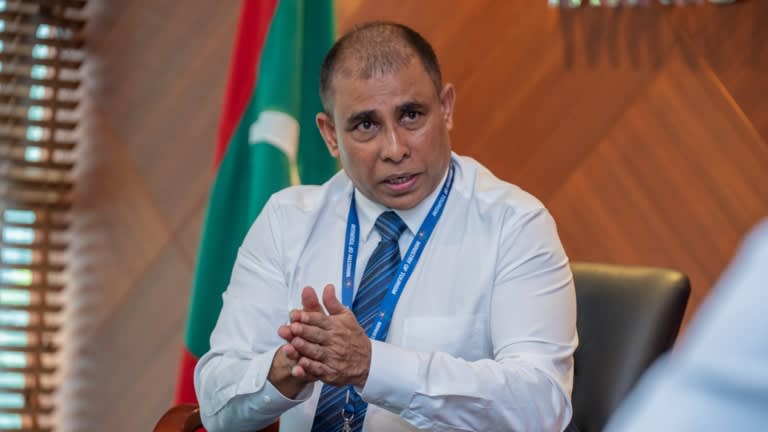 Tourism Minister Abdulla Mausoom told Nikkei Asia that the Maldives has not regained flights by a single airline from East Asia, including China. (Photo courtesy of Government of the Maldives)

Mausoom has a tough job turning things around. A key part of his work entails negotiating with governments in the West who have issued travel advisories against flying to the Maldives. The warnings stem from the relatively high COVID rates in the country, which has seen 10,000 infections and 34 deaths.

“We are working with those governments to show the history our three months of being open and the health standards we have implemented,” he said. “Community spread in the Maldives happens only in the Greater Male area and tourism has been designed not to engage with this area.”

The few airlines that have resumed flights since July reveal another challenge: East Asian carriers have yet to restart services. The 10 airlines that have brought holidaymakers include Aeroflot, Edelweiss Air, Emirates, Etihad Airways, Qatar Airways and Turkish Airlines, which account for the bulk of Western travellers. On Saturday, British Airways resumed its flights from London. The only Asian carriers are Air India, Indigo, SriLankan Airlines and Maldivian. 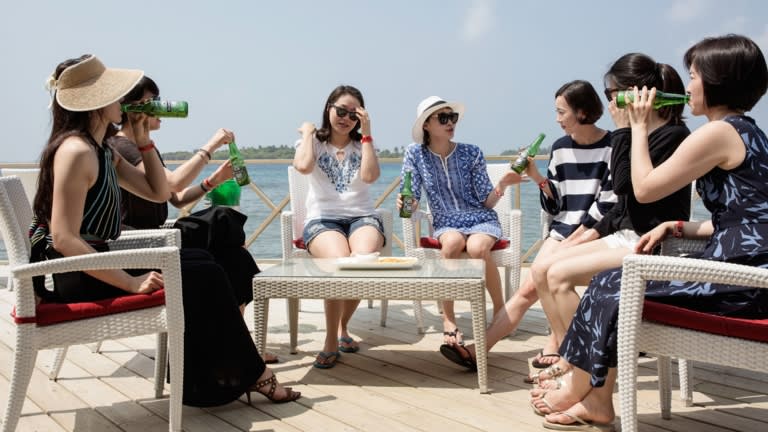 Chinese tourists gather for drinks in the Maldives in 2016, but their numbers have tanked due to pandemic-related travel restrictions.   © Getty Images

“This is where we have been hit the worst, which is why we have an 85% drop in arrivals from East Asia,” lamented Mausoom. He was referring to Chinese travellers, who accounted for the largest part of the market last year at nearly 20% of arrivals, followed by India and Italy. “We haven’t got a single airline from East Asia heading to the Maldives yet,” he said.